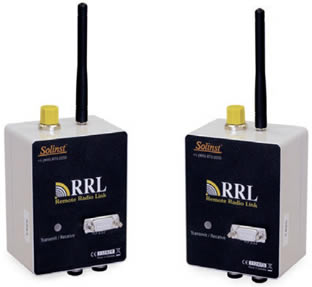 The Solinst RRL System offers a very simple and inexpensive method of local telemetry. Data is sent from the field via shortdistance radio to your Home Station PC. The RRL is excellent for small, closed loop networks such as mine sites, golf courses, and landfill monitoring networks. By using free unlicensed radio bands (ISM), the RRL has the advantage of being lower cost than cellular telemetry systems.

RRL Stations work with omnidirectional antenna, line-ofsight transmission, therefore, they can communicate over distances up to 20 miles (30 km). Optional antennas and using some stations as repeaters can maximize distances.

RRL Stations use a 900 MHz radio module. They use six replaceable lithium batteries, and also have the option of a back-up power source. Up to four Solinst dataloggers can be connected to one RRL (using two Splitters). The RS232 connection on each RRL is used for diagnostic, firmware updates and programming purposes.

All RRL Stations use the same hardware, and are programmed using a wizard in Solinst Telemetry Software as a Home Station, Remote Station or Relay Station (repeater).

RRL Stations are interchangeable as required. RRL Stations have a non-volatile internal memory, and they store collected data until the Home Station has been successfully contacted. 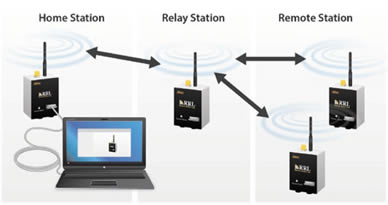 Systems operate on two basic schedules. A sample rate is set, at which an RRL records a real-time reading from each attached datalogger. A report rate is the frequency that the data is sent from an RRL to the Home Station PC. Optionally, dataloggers can be set up to record and store data independently of the RRL.

Reported data is saved in a dynamically updated database on the Home Station PC, and can also be viewed and exported using Solinst Telemetry Software. You have complete control of your data.